Hypoxia Dead Zone Measured to be Smaller this Year 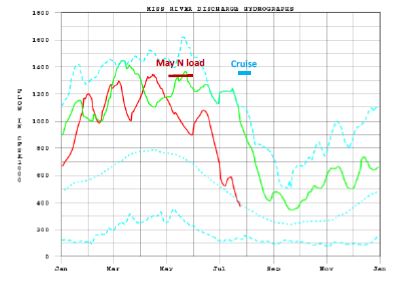 Mississippi River discharge and nitrogen loads were high in May, which led to a prediction of a large area of bottom-water hypoxia (estimated at 17,500 to 20,000 square kilometers) if no storms occurred.
The bottom area of low oxygen in Louisiana coastal waters west of the Mississippi River, commonly known as the ‘Dead Zone,’ was mapped at a much smaller-than-average size this summer. The area was 2,117 square miles (5,048 square kilometers), larger than Rhode Island but smaller than Delaware, and well below the projected estimate of 7,769 square miles (20,121 square kilometers).

This summer’s Dead Zone size was the third smallest area since mapping began in 1985. The average hypoxic zone size over 2015 to 2020 is 5,407 square miles (14,000 square kilometers) (about three times the size of the Hypoxia Task Force five-year goal reduction of 1,930 square miles (5,000 square kilometers). This size of this summer’s Dead Zone is close to the Task Force goal, but not because of a reduction in nitrogen loading, but because of weather conditions.

The LSU forecast on 2020 size (https://gulfhypoxia.net/research/shelfwide-cruise/?y=2020&p=hypoxia_fc) included a caveat about tropical storms or other wind and wave disturbances. If storms occur just before or during the cruise, then the predicted size was estimated to be 30% (i.e., reduced to 14,000 square kilometers).

Map of bottom-water dissolved oxygen concentrations. The combined less than 2 mg l-1 and 1 mg l-1 are the darkest colors and outlined by the black line.
Tropical Storm/Hurricane Hanna moved from east to west across the central Gulf of Mexico and crossed the Texas shore as Hurricane Hanna on July 25, which was the beginning of the hypoxia cruise.

Storm’s high winds and waves affected all coastal Louisiana and disrupted hypoxia by mixing the water column from the surface down to May N loadCruise about 65 feet. The persistent winds from the south generated downwelling favorable conditions pushing what remained of the hypoxic water mass into deeper, offshore waters.

The nitrogen loading of the Mississippi River to offshore remains high. There are efforts, however, for states along the mainstem and others in the watershed to reach lower loads ofexcess nutrient (Mississippi River/Gulf of Mexico Hypoxia Task Force (https://www.epa.gov/ms-htf).

Click here to read the REPORT FROM 2020 SHELF-WIDE HYPOXIA CRUISE.