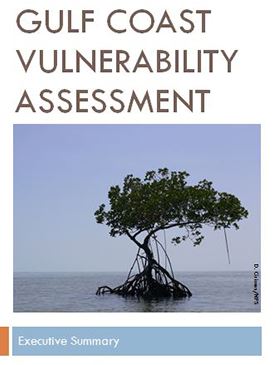 According to the U.S. Fish and Wildlife Service's website the award is given to an individual or group that, "Recognizes innovative applications of science to improve scientific quality, capability and efficiency to solve large scale conservation problems."  NGI led the teams in the development and application of the method used to assess critical habitats in the Gulf Coast region.

The assessment results identify which of these habitats are most in need of climate-related adaptation and mitigation strategies. Another advantage is that the evaluation provides direction on what environmental factors are affecting resources vulnerability, which can help natural resource managers choose the best management actions.

"This was truly a team effort with an extensive collaborative network that covered a large geography from Texas to Florida, which was crucial to the success of the project," GCVA coordinator and NGI research associate, Amanda Watson stated, "Large collaborations require a lot of time and energy, so for that effort to be recognized is very encouraging."

The Gulf Coast region is home to many different species of wildlife, such as the Spotted Seatrout, Mottled Duck and the Blue Crab. The Gulf Coast ecosystems provide storm surge protection, flood mitigation and nutrient cycling for marine life. The data collected from the GCVA will be used to inform the Southeast Conservation Adaptation Strategy (SECAS), a project that will assist coastal wildlife to adjust to their continually evolving habitat for survival purposes. The Gulf Coast ecosystem's well-being also has an effect on the economy and the coastal citizens because residents depend on the environment for nourishment and livelihood.

"It is important to assess the potential effects because these variables can have a drastic impact on both the economies of communities around the Gulf of Mexico, as well as natural ecosystems," a senior research associate at MSU's Coastal Research & Extension Center and the research coordinator for the Grand Bay NERR, Mark Woodrey stated, "For example, likely economic impacts may include changes in insurance rates for homeowners, direct loss of human-built infrastructure and increased coastal flooding due to stronger tropical storms and increased intensity of rain events."

Six different coastal regions assessed by the GCVA team include members from the Gulf Coast Prairie, Gulf Coastal Plains and Ozarks, South Atlantic, and Peninsular Florida Landscape Conservation Cooperatives. These GCVA experts in partnership with the Gulf of Mexico Alliance and partners from federal and state agencies, non-governmental organizations and academic institutions have crossed geographical and organizational boundaries to guide conservation and restoration efforts in order to identify vulnerable areas across the entire Gulf Region in which to focus critical resources.

"The GCVA team's methodical collaboration transcended organizational boundaries to combine limited resources to collect data that emphasizes key vulnerabilities of the Gulf Coast region," said Steve Ashby, co-director of NGI. "This assessment will support the long-term sustainability of marine and wildlife species, communities and the various ecosystems they share."

The award recipients will share $50,000 to be utilized at their field stations to assist with further scientific work. The monetary winnings of this award will aid in the continuation of advancing scientific quality, capability and efficiency.

To learn more about the Gulf Coast Vulnerability Assessment and to download the GCVA report, please visit https://lccnetwork.org/resource/GCVA.